This is a continuation of interviews with and journal excerpts from Jean, a woman in treatment at a recovery center in northern Thailand. I am grateful for Jean's candor. 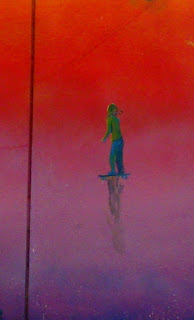 "I'm in treatment for drug and alcohol use. My idea. I'm staying in a low key former resort in northern Thailand. It is surrounded by fields and trees, and overlooks a Chinese mausoleum carved into a hill. The hill is covered with grass that a caretaker mows slowly every day with a push mower. Chickens follow him searching for grubs. In the distance, you can see mountains. There are telephone poles and wires along the road next to the hill. Birds gather on the wires.

I'm no poet but I wrote a verse about the cemetery.

If I were that bird on the wire, gazing on the cemetery planted in the hill where chickens scatter. The man mows the dead every day. Deliberately. Slowly. Clouds lifting and falling in the mountains beyond. Then I too would sing.


It's beautiful here although there's nothing upscale about this "resort". The red metal roofed bungalows are dark and austere inside so it's nice to be outdoors most of the time. There's a clean little pool. My fellow "inmates" are nice."

One is a very young man with no responsibilities in the outside world. His family takes care of everything for him. His use and dealing make a lot of drama for them that they then clean up. He has already tried to create drama here but has been cautioned with expulsion. It's up to me not to get pulled in. The other fellow staying here is a dad with lots of kids. He loves them and is trying to get straight for them.

All three of us are daunted by the journey to sobriety.

Journey to sobriety! Sounds like an AA slogan. This is in fact a 12 step program. Unapologetically so. The drill sergeant in charge/head counselor is a street wise British bulldog of a man. We're required to memorize and work the steps. It is not possible to bullshit him so I respect him. He is unrelentingly honest but not brutally so. The others might disagree.

The young man constructs what seem to me to be lies about himself and his use. He does this in the mandatory counseling group sessions. The drill sergeant confronts him relentlessly. I wonder what it will take for him to get square with himself? However, his recovery is not my business. My recovery is. He is a distraction. A shadow.

I am not wanting to be a shadow which is what I was turning into by drinking and hiding. I tricked myself into believing that I could just drink myself into that good night in a gentle quiet way. I forgot that alcoholism takes your body by the inches. I have watched people die from it. It does not take you gently into that good night. There is a lot of puke and blood and shit. There is a lot of suffering.

Strange that I would choose suffering in such a way for myself. Alcoholism--my parents' in particular--has always disgusted me. Drunks do disgusting things. Abuse their spouses and their children. Chase away their friends. Piss away their money.

God, but there are some big insects here! Grasshoppers the size of sticks and bees as big as my thumb! I'm writing this on the porch of my bungalow. I've set up the fan so as to have a breeze. Although cloudy, it's quite humid and in the nineties.

We had a group this morning where I admitted that Mother's Day (in Thailand today) gives me a pang and brings up unpleasant memories of my mom. I especially like to dwell on her attempted suicide when I was in tenth grade. The shame of walking in on it with some friends after Saturday afternoon at the movies. My friend Lisa's father coming to pick her up and silently assessing the situation. Broken down door and the police milling about. What blows me away now that I think about it was that the police just left us-- a sobbing suicidal woman on the bed with her incredibly angry daughter and a broken down door. There were no follow-up visits from a social worker. No treatment for my mom who should have been taken to the hospital that evening for observation. It's funny but I just realized that. We were left to fend for ourselves.

It didn't occur to me or to my mom to ask for help. I condemned her for being weak and for thwarting my hopes for a happy family with her boozing and drugging and serial loser boyfriends. She was in a world of hurt and had been for some time. I was as an adolescent wrapped up in my own world as teens are. As an adult, I remember many times suggesting that she get counseling. She blew it off. The honesty required in counseling would have killed her.

Or so she thought.

I brought up my mom in group today and one of the counselors-- the youngest one whose own mother had just died-- said that eventually I'd let it go or that I needed to or words to that effect. Later, the head counselor said privately that he didn't think anybody ever let that kind of anger toward parents go although we did come to realize that our parents were also very sick. Which is true. And toward the end of her life, I did come to see that she was a lonely sick frightened woman who had done the best she could given who she was. Unfortunately, it wasn't good enough. 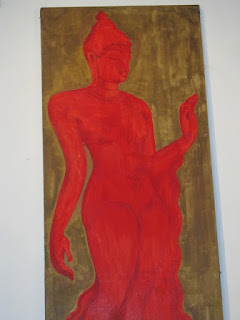