Divorce and Re-Marriage (with the Same Person)

My second husband, Nat, and I married about fifteen months after my marriage of twenty-nine years ended. After two years, we divorced. Recently, we married again in Chicago. Most people don't remarry after they divorce. We are a statistical anomaly.

My first husband, John, died in January, 2008. He was 55--I was 53-- when he died. A devoted Christian and gifted math teacher, he preferred to live rather than talk about his faith. Although death comes to everyone, I fell into shock and depression when he was gone. I had loved him deeply and he me. We had started a school in an inner city together, traveled the world with each other, and written books as a team. More than that, we were totally committed to each other.

After a time, I realized that I needed to make some major changes in my life if I were to survive his death and ultimately thrive. Type A, driven personality that I used to be, I dove into medical school to earn a much longed for masters of public health and tried to figure out how to live and work abroad. This had been my dream since I was 18 years old, but for various reasons and insecurities, continuously put on hold. John's death underscored that life is short. It was time to move forward despite all my grief and insecurities.

However, I wanted a life partner to explore this next part of my life with me.  Relentlessly, I put out a request to God for a soulmate. Be advised! Such a request is dangerous. Soulmates show you where you need to grow the most. But that is what I wanted--not to be admired but to grow. So after a time, I signed up for on-line dating--Perfect Match-- (for those of you who are curious). There I met many very nice and not so nice men. The last match was Nat.

His picture featured a handsome dark knight in shining armor (that's how he described himself) with sexy eyes and a stained T-shirt. (Oddly, I found the T-shirt endearing.) For weeks, we talked for hours on the phone. Finally we met. But our first date was a disaster. There was too much anxiety on both our parts which manifested as arguing. However, during subsequent dates, the anxiety disappeared. We became good friends, and realized we had some pretty deep spiritual, intellectual, and emotional connections.

Nat was the only person I wanted to accompany me to Chicago when my mom was dying in the hospital.  Putting it mildly, our relationship had always been difficult. Maybe in the hospital, there was a chance that some healing of our relationship could finally occur. But even if this didn't happen, I wanted to spend mom's final hours with her. I didn't want her to die alone.

Once at the hospital, my mom told me she knew she was dying. She could scarcely breathe. Mostly she was sedated and slept. But two days before she died, mom woke up and asked me to tell her a joke.

"Everything is too serious in this hospital," she gasped.

It was understandable that my mom needed a laugh. We both did. But telling jokes is not my forte. And anyway, what kind of joke do you tell your dying mother?

So I bided for time.

"I'll come back tomorrow with one," I said.

Mom went back to sleep.

When I got back to our hotel, I asked Nat, who used to be in sales, and knows a lot of stories, for advice. He told me an Ole and Lena joke. Those of you from the upper Midwest have probably heard more than a few Ole and Lena's-- jokes about a married Norwegian/Minnesotan frugal farm couple who aren't too quick on the uptake. They are best told with some kind of Scandinavian accent.

Ole is on his death bed at home.
He asks his wife, "Lena, is everyone here?"
Lena replies, "Yes, Ole. All your friends and family are right here in the bedroom with you."
"Lena, are you sure?" Ole says.
"Yes, Ole, I'm sure they are all here."
"Well, if that's so, Lena, why are the lights on in the living room?"

My mom, who had always been extremely frugal of necessity as a single mom raising kids on a clerical salary, laughed when I told her this joke. Then she said was happy that I had found a new love.
She died the next day.

Shortly after my mom died, Nat and I married. I landed a job as a counselor at an international school in Hong Kong. We lived in Hong Kong and then after a couple of years retired to Thailand.

Not to be repetitive, but soulmates, despite great love for each other, point out the areas where both need to grow. Depending upon the resistance, obstinacy, flexibility, and ultimately love of the partners, this can lead to deep growth or great pain and/or both. The ability of both partners to love ultimately decides whether the relationship continues.

Our first years were painful. We reached an impasse through which there seemed no thoroughfare and divorced. But we never parted ways. Our connection remained. We nurtured it through counseling (painful but insightful), phone calls, dates, and trips. We let go of unnecessary expectations and discovered commitment to core values.  Our love deepened as did our relationship.
We realized that love is the most powerful force in the universe. So we  tapped into it. Two years ago, Nat and I remarried. We remain steadfastly a statistical anomaly. 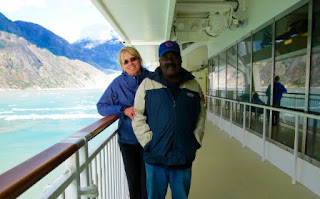 In many ways, we have an unconventional marriage. But it suits us. And that's what matters. Upon remarriage, we had a honeymoon in Alaska complete with the blessing of humpback whales we saw in sunny Juneau.

Love is the most powerful force in the universe. Let go. Tap into it.