And We Still Have a Long Way to Go

It’s been almost six years since my life partner of 30 years died. He died this time of year. This is the first holiday season since John has been gone that a fog of grief hasn’t enveloped me around Christmas. Partly, I’ve been too busy to hang onto grief—working and rehearsing for two plays have been pretty all consuming. (There was also a wonderful trip to Hong Kong in November.) Partly, the compassionate intelligence that runs the universe pushed me through a door to the other side of grief. It's pretty interesting on the other side if for no other reason than it requires me to be a lot less self-absorbed.

This month's blog is a little different: it's another excerpt from the novel I'm writing. It's a fiction/nonfiction blend like all novels-- not autobiographical in many respects-- yet it describes the foundation for why I live in Asia.... Oh, and one more thing...I have always loved libraries and The Brighton Park library was my first love. (To jog your memories, the main character of the novel is Kate, a sixth grader living in blue collar Chicago in the 1960s.)

Kate had once written a book report about Father Jacques Marquette, a Jesuit missionary who ventured from France to explore the Great Lakes region in the1600's. Her geography assignment had been to write something about a pioneer explorer with some connection to Chicago. Kate's favorite park was named after Marquette so she picked him. 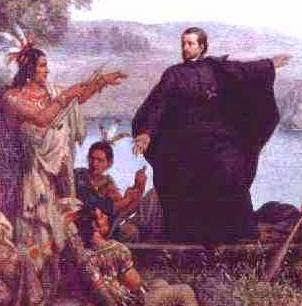 Jacques Marquette spent a lot of time in what were now Michigan, Wisconsin, and Illinois before canoeing down the Mississippi to the mouth of the Arkansas River. When he got to the Arkansas, he found out that the Spanish were already there. This spooked him. The French and Spanish were not getting along at the time. He feared being captured. So he and his friends turned around and paddled back up the Mississippi. They returned to the Illinois Territory in late 1674. The World Book Encyclopedia and various biographies said different things so Kate wasn't too sure how it happened, but somehow Marquette became one of the first Europeans to winter in what would become the city of Chicago.

Winters in Chicago were windy, damp, and often brutally cold. When she asked her best friend what Catholics knew about Father Marquette, Daiva said that the nuns at Immaculate Conception called him Pere Marquette and told students that the Jesuits were the smartest priests in the Catholic Church. Kate thought that even if he was adventuresome, and according to her research, very good at learning languages--something Kate envied--Marquette couldn't have been that bright if he had other choices but decided to winter in Chicago. Or leave the sparkling light of France for that matter. But smart or not, Marquette was a famous pioneer explorer and many places in the Midwest were named after him.

Kate considered herself to be a budding, although not yet famous, explorer. She could get to Marquette Park by taking the Archer Avenue bus, transferring at Kedzie, transferring again at the Kedzie/55th Street bus hub and then riding to 67th and Kedzie where the park was. It was a forty minute trip from home. Kate knew this wasn't as long or dangerous as canoeing around on the Mississippi, but it was not as easy as taking one bus to get downtown to where the museums were. As a result, Kate didn't get to the park much. But when she did, she was glad for the effort. For one thing, Marquette Park was green and alive. At three hundred acres, it was the biggest city park on the southwest side of Chicago. It had lots of huge trees, a sparkling lagoon, and a rose garden. There was also a stone field house that looked like a castle. Once inside the park, Kate forgot the factories and rough and tumble industrial neighborhoods that surrounded her. She could almost see the light of France.

In late July, her parents, much to her surprise, told her not to go there anymore because it wasn't safe. Dr. Martin Luther King was set to lead a march at the park on August 5. Everyone was expecting trouble they said. Kate was stunned. Not safe at her beautiful park? And even worse: who was the snitch who told her parents she went there?

Kate was disgusted. This was a new low even for him.

The day before the march, Kate went to The Brighton Park Library. She'd been working her way through the library's most up to date collection of World Book Encyclopedia published in 1965. Her goal was to read all the volumes cover to cover. Although currently in volume 10, she decided to detour to eleven that covered J/K.

Maybe the encyclopedia would help her unravel the mystery of Dr. King. Why was he going to march in Chicago? What was this "open housing" that he kept talking about? Why did so many people have such strong opinions about him? She had watched him speak on TV. He talked a lot about peace and nonviolence. But what did that have to do with Marquette Park?

World Book wasn't much help. There was only a brief entry about Dr. King describing him as a Baptist minister who was born in 1929 in Atlanta, Georgia. He had attended a bunch of different colleges including one in Chicago called The Chicago Theological Seminary. In 1958, he had written a book called Stride to Freedom. The encyclopedia went on to say that he led a Negro movement to end racial segregation in the U.S. by organizing peaceful protest marches as part of his "passive resistance program". It didn't explain what passive resistance was. Dr. King took part in these marches and for some reason was jailed several times. In 1963, he also did something to end racial segregation in Birmingham, Alabama but there was no mention of what it was.

She checked the date to make sure the volume was actually published in1965. It was.

Kate searched the shelves and card catalogue for books about him. There weren't any, including the one he had written, in the library. She even investigated the children's section where she rarely spent any time even though all she had was a juvenile card. Kate had devised a way to check out books from the adult collection which was where all the interesting books were. If questioned by the librarians who snarled when she tried to take out adult books, she said they were for her dad who worked long hours and wasn't able to get to the library when it was open. After all, this was partly true. Her dad--unlike her mom--loved to read even though his drinking prevented him from getting to the library often. He had taken Kate to the library when she was in second grade to get her first card. Because he especially enjoyed books about military history, he selected one for her about World War Two, but  because he was drunk, it was from the adult collection. She had struggled with it. Besides having a lot of big words, the story--something about a submarine--was pretty dull. However, she finished it and returned the book for a more interesting one about Paris. Kate had been hooked on the library ever since.

But if this library didn't have books about Dr. King, what else didn't it have? 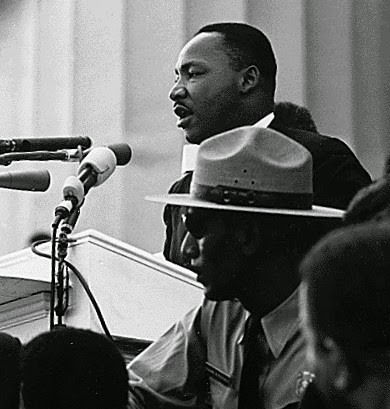