Venomous cobras, water buffalo, elephants, geckos, pink dolphins, goats, and dogs--those of you who read this blog regularly know that I write often about my experiences with animals in Asia. And for quite some time, I've been thinking about how to connect animals and humans in a way that is almost unknown here.

Therapy and service dog programs are in their infancy in Chiang Mai, Thailand (and I suspect in most of the rest of Asia). In fact, I have lived in Asia for almost four years and haven't spotted a "seeing eye" dog yet.

The calming benefits of therapy animals and the usefulness of service dogs are taken for granted in the West. There are a lot of people in Asia, as in the West, with disabilities who would benefit from therapy and service animals. They are much needed in this part of the world.

I've been a counselor for a long time but it doesn't take counseling experience to recognize the calming effect animals can have on humans in a variety of settings. My first exposure to this effect was back in college when as a docent for the Lincoln Park Zoo in Chicago, I took parrots and ferrets into a children's hospital. Although the ferret was a tad cranky and the parrot had talons that required respect, the kids were delighted when we showed up.

A second exposure was on a flight I took years ago on a small commercial airplane that ran into a lot of turbulence due to a thunderstorm between Erie, Pa and my Detroit destination. Fortunately, one man on the plane had a therapy dog. As the plane rocked and dived, all of the passengers strained to observe what the dog was doing. When we saw that he was stretched out on a seat soundly asleep, the humans collectively breathed a sigh of relief. If the dog was chilled out, things couldn't be that bad because animals have instincts about impending disaster, right? Every time the plane shuddered or swooped, all eyes turned to the dog. He remained asleep. As it turned out, things were pretty bad. The plane experienced numerous malfunctions and the thunder storm was so violent it forced us to land in Cleveland instead of in Detroit. But the dog was relaxed through it all and therefore, so were we. 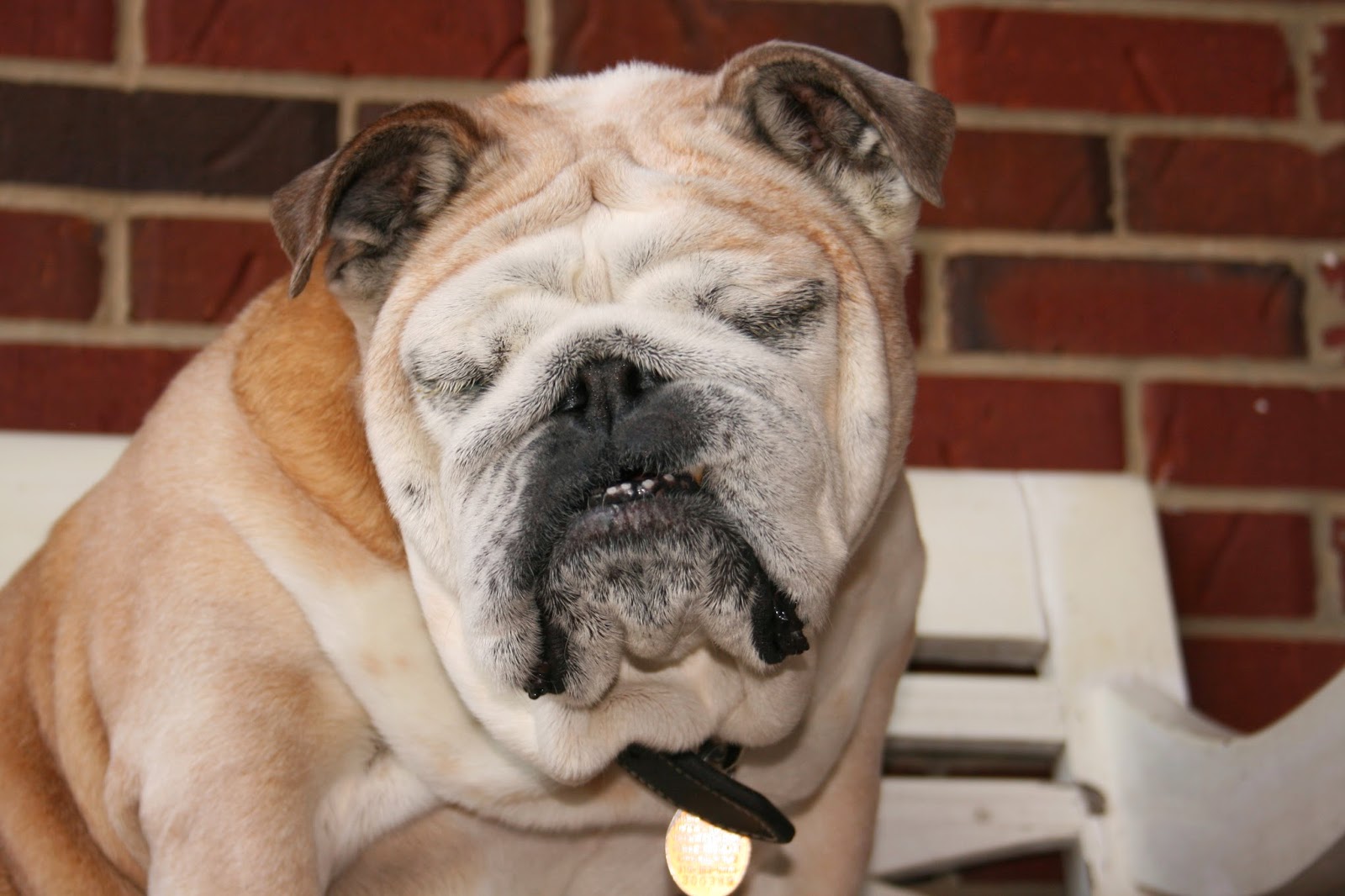 During the years since that flight, I have seen therapy and service dogs in action in America at facilities for Alzheimers patients, at schools, and in nursing homes. The animals' effect on  humans in these settings is always the same. People relax. Animals' unconditional affection is powerful. 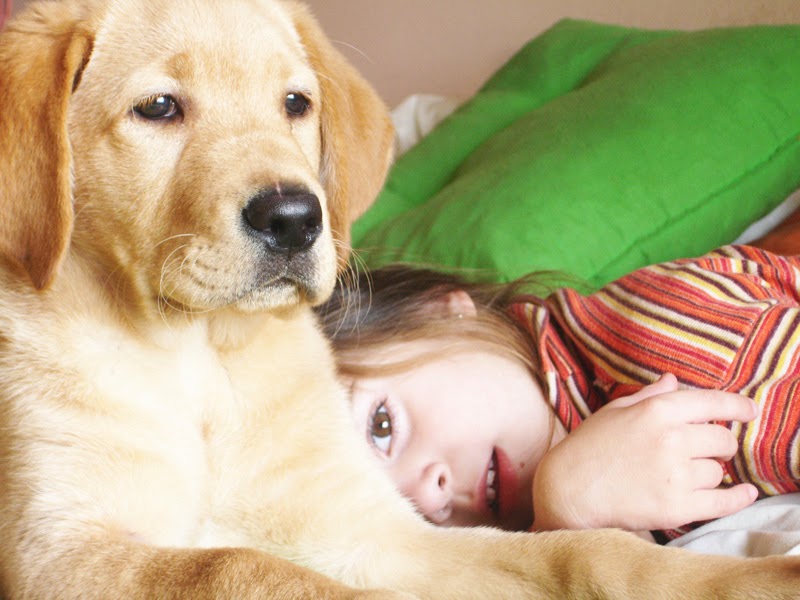 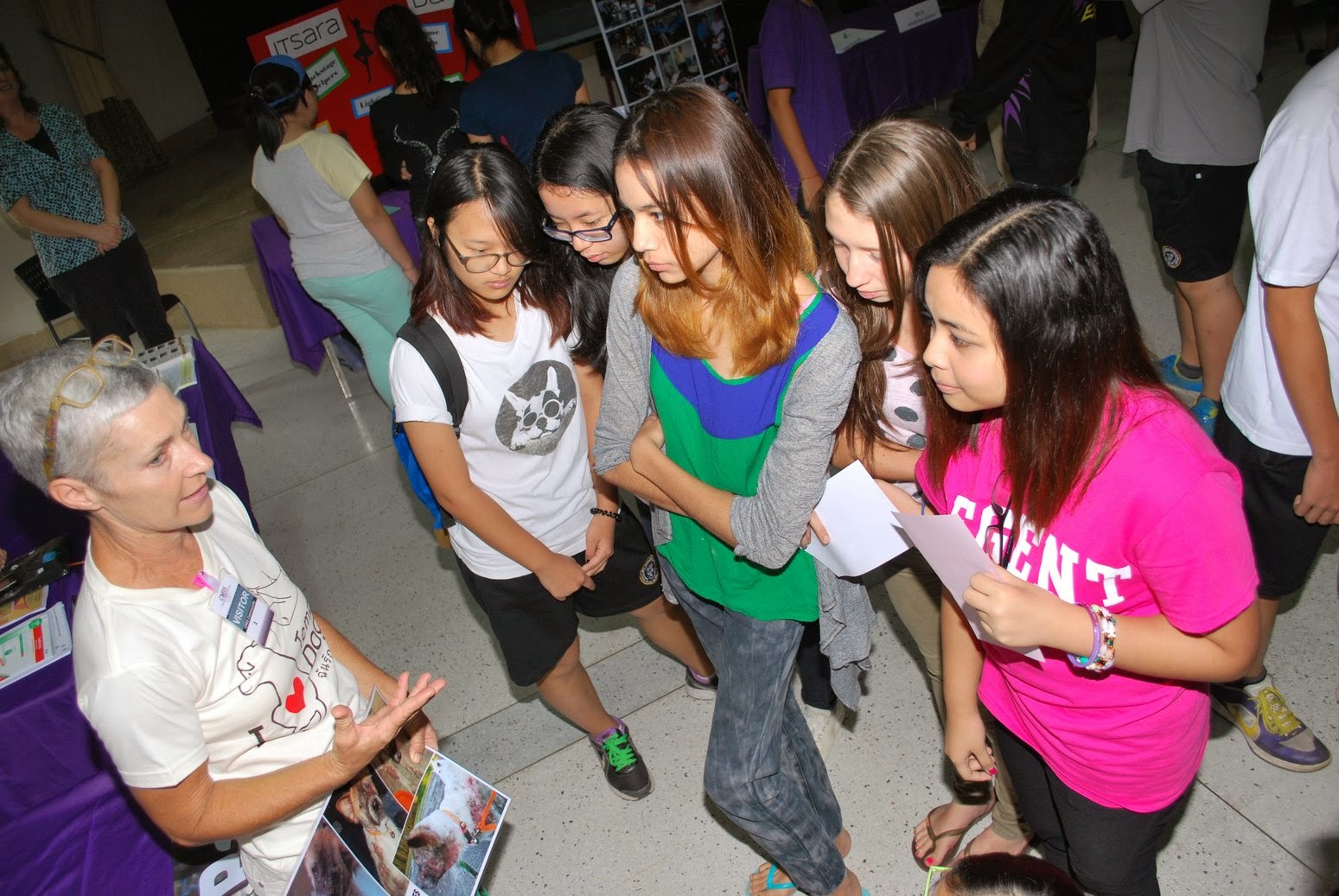 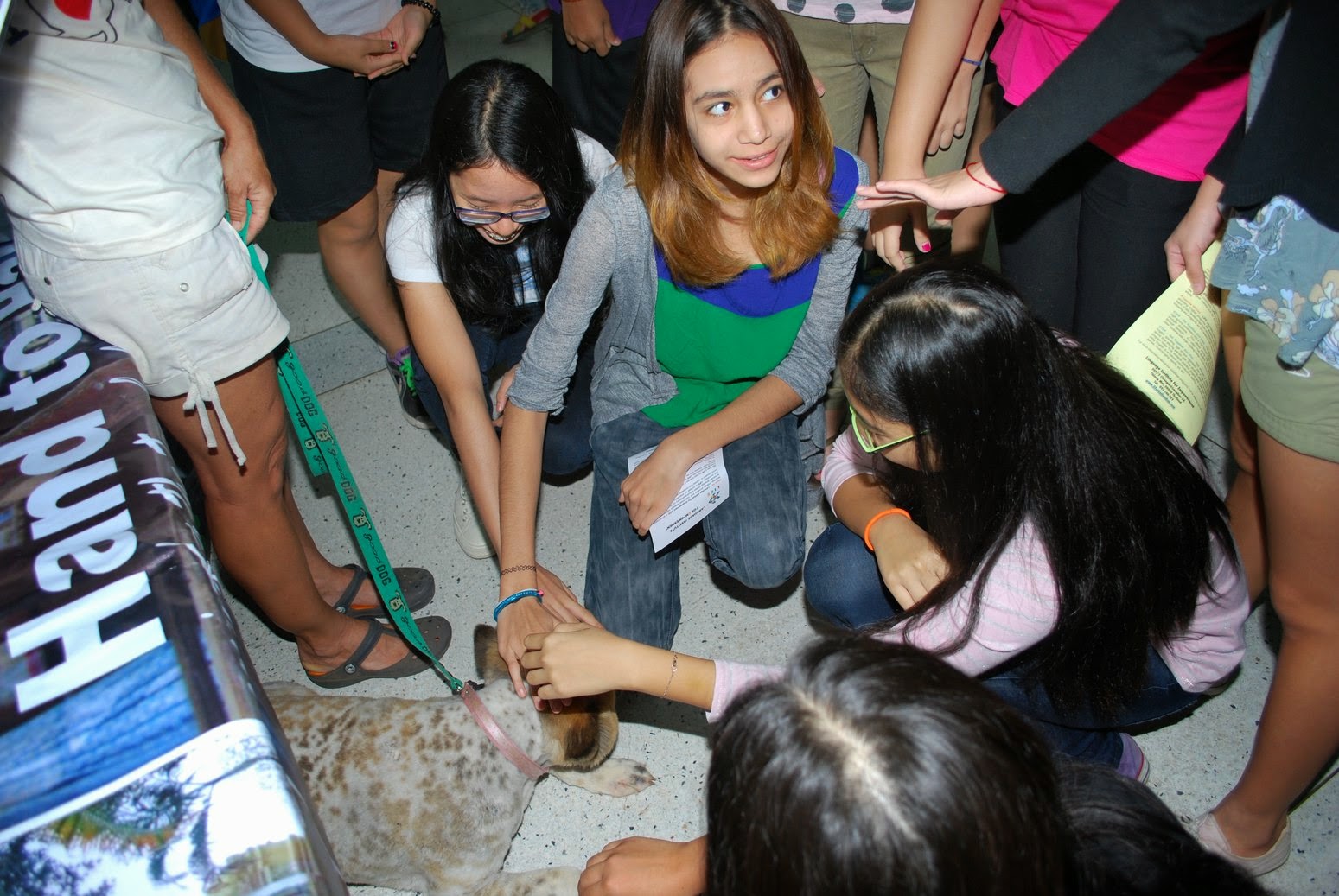 Seventeen local service organizations including the Chiang Mai Care for Dogs Foundation sent representatives to the fair to recruit student volunteers. Care for Dogs provides dog rescue, sterilization, vaccination, adoption, and outreach programs designed to help the large stray dog population in Chiang Mai. Since many Thais bring soi (stray) and other unwanted dogs to the Buddhist temples throughout the city, Care for Dogs has organized a temple outreach program called Hand to Paw. The program connects middle and high school students (with school assistance) to temples so that kids can help monks keep temple dogs healthy and not reproduce. 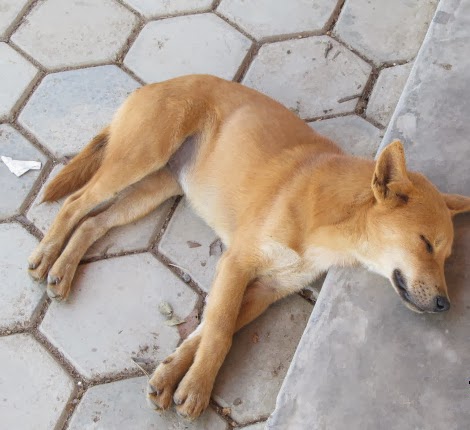 The Hand to Paw outreach coordinator is happily passionate about dogs and her work. Appropriately, her name is Joy. She represented Hand to Paw at the service fair and brought a charismatic therapy dog who was the most popular guest there. Later she met with an interested teacher and me to discuss the ground work that needed to be done to establish a student chapter at the school. She also met with the head monk at the temple (or wat) next door to my school and investigated the size and health of the temple’s dog population as well as the monks’ receptivity to student helpers. Joy learned that there were 8 dogs residing at the temple and that the monks would welcome help from the students. While we are still working on establishing a school chapter, eventually, the dogs, monks, and kids will connect for the benefit of all. 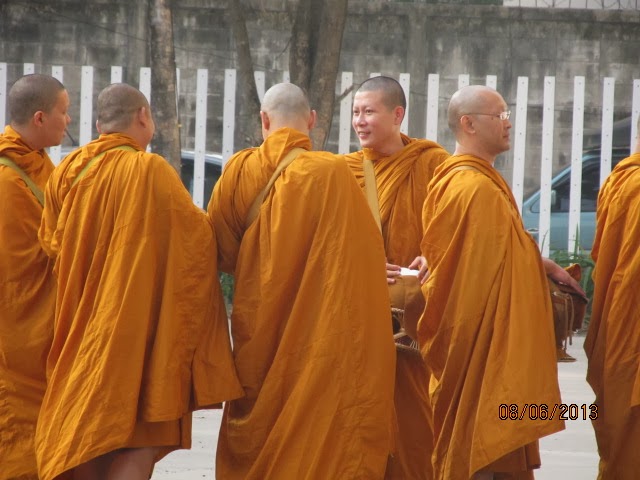 In preparation for starting a Hand to Paw chapter, I recently took an on-line Animal Assisted Therapy class through Pet Partners (formerly The Delta Society). Lots of American occupational therapists, counselors, nurses, and social workers took the class as well. One fellow student, Karen Donnick, shared the following powerful story which has made me even more determined to give animal assisted therapy a jump start in Chiang Mai.

"On our visit to the Naval Hospital, while visiting in patients' hospital rooms, a doctor came to us and asked us to visit a young family in the intensive care unit. Not being sure what to expect I took the time to wipe my dog down with Nature's Miracle Pet Wipes from head to tail, including paws. He had been bathed prior to visiting, but I wanted to remove anything that he may have picked up visiting in the patients rooms. The doctor escorted us into one of the cubicles in intensive care where three small children were huddled together in a chair. Their mother across from them was in the hospital bed connected to an IV and all sorts of monitors. The children's father was in the Navy, deployed, and their mother was alone with their children and seriously ill. The hospital staff was waiting for a family friend to come and collect the children. These three children had been at the hospital traveling with their mother from the emergency room to being admitted into intensive care, and they were beyond control. The eldest was 5 years old."

"The staff was at their wits end how to control these children, as they ministered to their very ill mother. They had exhausted their supply of peanut butter crackers, candy and cookies. We visited in the intensive care with the children until the family friend arrived about thirty minutes later to collect them. As I started to leave with a very sticky and exhausted golden retriever, the mother beckoned for me to come closer. I hadn't paid much attention to her the entire time we were entertaining the children and I was thinking about returning home and bathing the dog. I was amazed by her appearance when I approached her. Her skin was yellow and she looked gravely ill. "Thank you" she said, "I haven't allowed myself to be sick until today. You and your dog are angels, for the first time in months I could concentrate on me and not the children. " Then she hugged my dog and started to cry. "I am terrified that I am going to die." She hugged my sticky dog and cried for about three minutes. Then we quietly left. As I was driving home I wondered who was most moved by that experience. Sometimes the patients inspire the therapy team. It is experiences like this that keep me coming back with my special dog."