Linda is down by the river laughing and bathing elephants. We're in northern Thailand at an elephant conservation park an hour outside of Chiang Mai. The valley here looks like it's right out of southern Wisconsin (except for the elephants.) It's hilly country covered with green forest. There's also a river that is brown and swift because it's the rainy season. 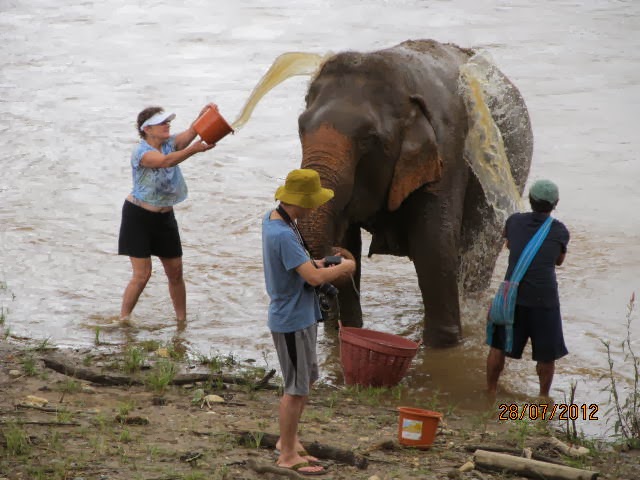 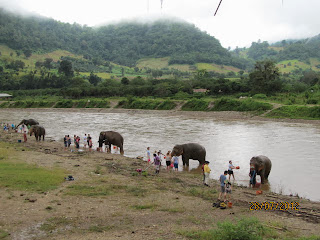 I'm sitting on a covered skywalk enjoying watching Linda enjoy herself. Linda and I are both widows. She is in her second year of grief and I am in my sixth. We are both our usual edgy selves. But all told, we seem OK. Maybe we are--especially here in this sanctuary.

It's cloudy. The mist has lingered all day-rising and then falling around the tops of the hills. There have been brief periods of rain. I've been here before in a different season when the sun beat down relentlessly and penetrated me like an x-ray. The clouds and rain feel better. 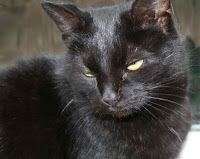 Our guide told us that there are now 34 rescued elephants and two babies who were born here. One is about a month old. There are also 450 dogs rescued in Bangkok from the gruesome dog meat trade. Plus a hundred water buffalo. There are lots of cats who have a their own place to live separate from elephants, dogs, and water buffalo. Cats come and go as they please and and so their numbers are hard to come by. I don't really need to know how many cats there are. It's just pleasant to see them. 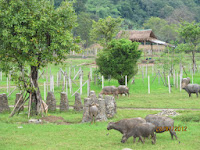 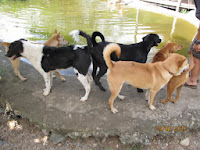 A group of very sour smelling tourists have just surrounded me. They are speaking a European sounding language I don't recognize. Some of them are eyeing me. Or rather, hungrily viewing the comfortable wicker chair on which I'm sitting. Such acquisitive eyes!

Linda and I will be spending the night here in a hut. After most of the visitors leave when it grows dark, maybe we will hear the elephants snoring. The elephant sounds I have heard so far include trumpet, growl, roar, gurgle, and squeak. I'm a sound junky and want to hear more. And like elephants, I have poor eyesight, but keen hearing and a good sense of smell. Plus, I never forget. At least, I never forget when it comes to voices. Some people remember faces. Not me. Faces come and go. But voices. Those stick. And the voices of elephants are especially memorable.

I'm listening to those voices as well as the sound of splashing, gurgling, and laughing as people are filling buckets in the river and throwing the water on the elephants to bathe them and each other.

The elephants come here in various states of abuse but a tiny woman with a large heart named Lek Chailert rescued them and started a foundation/park to save elephants in Thailand and nearby Myanmar. In addition to saving elephants, this park supports the local economy by providing a consumer for locally grown produce (elephants are vegetarians and eat a lot every day) and giving jobs to unemployed mahouts (elephant handlers) who also mostly happen to be refugees from Myanmar.


All the elephants have stories. Linda and I have been able to walk around and meet and touch and communicate with the animals who are highly social and tend to live in families or with female companions. All the elephant females (our guide calls them ladies) have friends and the babies are protected by mommies and nannies. If there is any potential threat to a baby, there is much trumpeting and jostling as the females form a protective circle around the little one.

The three rescued males are kept chained because they are so aggressive they hurt the females. But the female led families visit the males and keep them company so they don't get too lonely.

One lady we met on one of our walks was Mae Tee who was born between 1945-50. Her name is the Myanmar Karen ethnic group's name for river. She was forced into logging in Myanmar and was made to take amphetamines so she would not stop working. This overwork has left her with stiff wrist joints and deteriorated ankle joints. As a result, Mae Tee is unable to lay down so she only sleeps a couple of hours every day while standing and putting her head in a wooden headrest the mahouts have constructed. She goes to the onsite elephant clinic twice a day to get treatment for her injuries. Mae Tee's best friend and companion was an elephant named Mae Kham Geao who died a year ago and is buried on the facility. Mae Tee visits the grave each day and doesn't tend to roam too far away from it. I now foster Mae Tee in memory of my mom who died a few years ago.

Another lady we met was Mae Jokia who was blinded in both of her eyes by her logging mahout. Born around 1960, she suffered a miscarriage while pulling a log uphill. She wasn't allowed to stop working to see if her calf was dead or alive so she sat down and refused to get up. And that was when her handler blinded her by hurling rocks into her eyes.

There are many more stories about the elephants who are now in this place where they are loved and cared for. And being healed. Linda and I fit right in with the rescued creatures here for in fact, we are being healed as well. 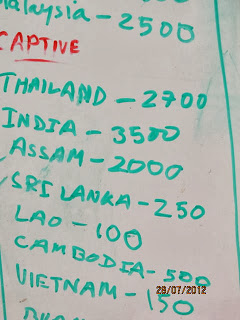