Today, just like many days, I am riding in a song taew--a modified pick up truck with two padded plastic covered benches in the bed. Song taew literally means two benches in Thai and riding in one is the most popular form of public transportation in Chiang Mai because it's cheap and convenient. A trip in the city costs 20 Thai Bhat (66 cents USD). There are song taews everywhere so they are easy to hail. (On the other end of the scale, are blue and yellow cars marked "Taxi Meter" that do not actually have meters. "Taxi Meter" rides start at $4.00 USD. The choice is clear.) 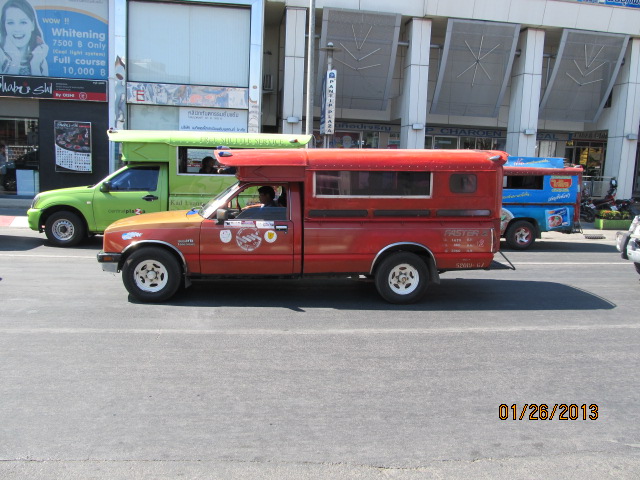 Instead of riding in the back, the driver has invited me to sit up front next to him. This is definitely a more comfortable option although neither back nor front are air conditioned and it's 95 degrees out. The photo below is the back where passengers usually ride. 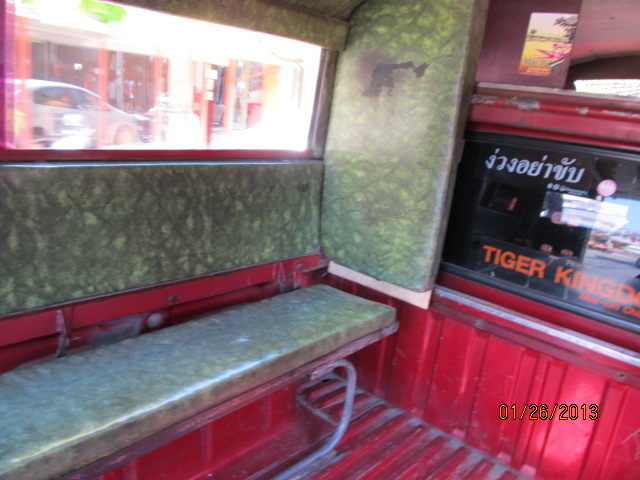 On the dashboard of the song taew are a photo of the driver's glossy black cat, a bottle of some green liquid, and a half eaten banana on which many tiny ants are feasting. There are also a few small statues of the Buddha and a picture of a smiling elderly saffron robed monk the driver says is his teacher. Hanging from the rear view mirror is a garland of pink ribbons, mysterious white flowers, and red roses. 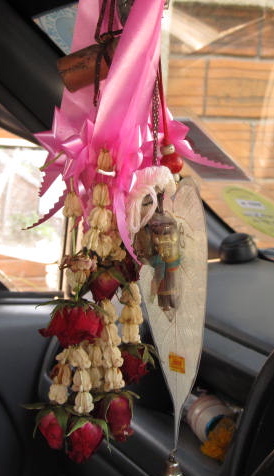 The dashboard altar is a common feature of most song taews and taxis I have taken in Chiang Mai. Only the objects vary. Food offerings are frequent. Some altars have a variety of amulets. Others have small statues of various Buddhist saints. I am grateful for whatever protection these altars provide since the driving here is unpredictable. Traffic lanes are pretty much advisory. A vehicle typically occupies two lanes simultaneously. It's also not uncommon for drivers to make right hand turns at intersections from the far left lane by crossing three lanes of traffic. Interestingly, there is not a lot of horn honking or road rage when this happens. Motor scooters-- in swarms-- wind their way around cars and sometimes decide to go the opposite way the traffic is supposed to go. This all makes for an adventurous ride.  Ganesha, the Thai/Hindu elephant god of luck must be pretty active since I haven't seen a lot of accidents. 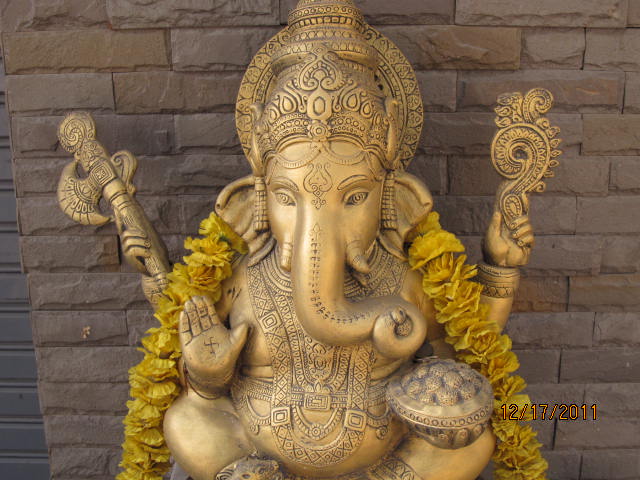 The man with cavernous eyes and gaunt cheeks has transported me before and is a relatively safe driver. He looks pretty serious most of the time. Driving for a living in Chiang Mai traffic has taken its toll by the looks of it. But when he occasionally smiles a toothless grin, his face shines like the full moon breaking through clouds on a stormy night.

He speaks little English and I less Thai. But we communicate somehow about his cat and his teacher. He is quite fond of both. Suddenly, the cat appears on the seat. Has she been there all along and I haven't noticed, I wonder? This seems unlikely but before I have time to come up with a better
explanation, she begins to purr so loudly that communication with the driver is no longer possible. Looking out the half open grimy passenger window at a row of vegetable vendors and noodle shops, I spot another black cat.

Just then, the cat on the seat pounces onto my lap and leaps out the window. The driver pays no attention and keeps going as if the cat was just another passenger and had simply reached its destination. I look out the window to see if the cat is OK but it is nowhere to be seen.

Having ridden with this driver before, and on other song taews as well, I relax in the confidence that at least I won't have to jump out the window when we get to my stop.

Or at least, I don't think so. 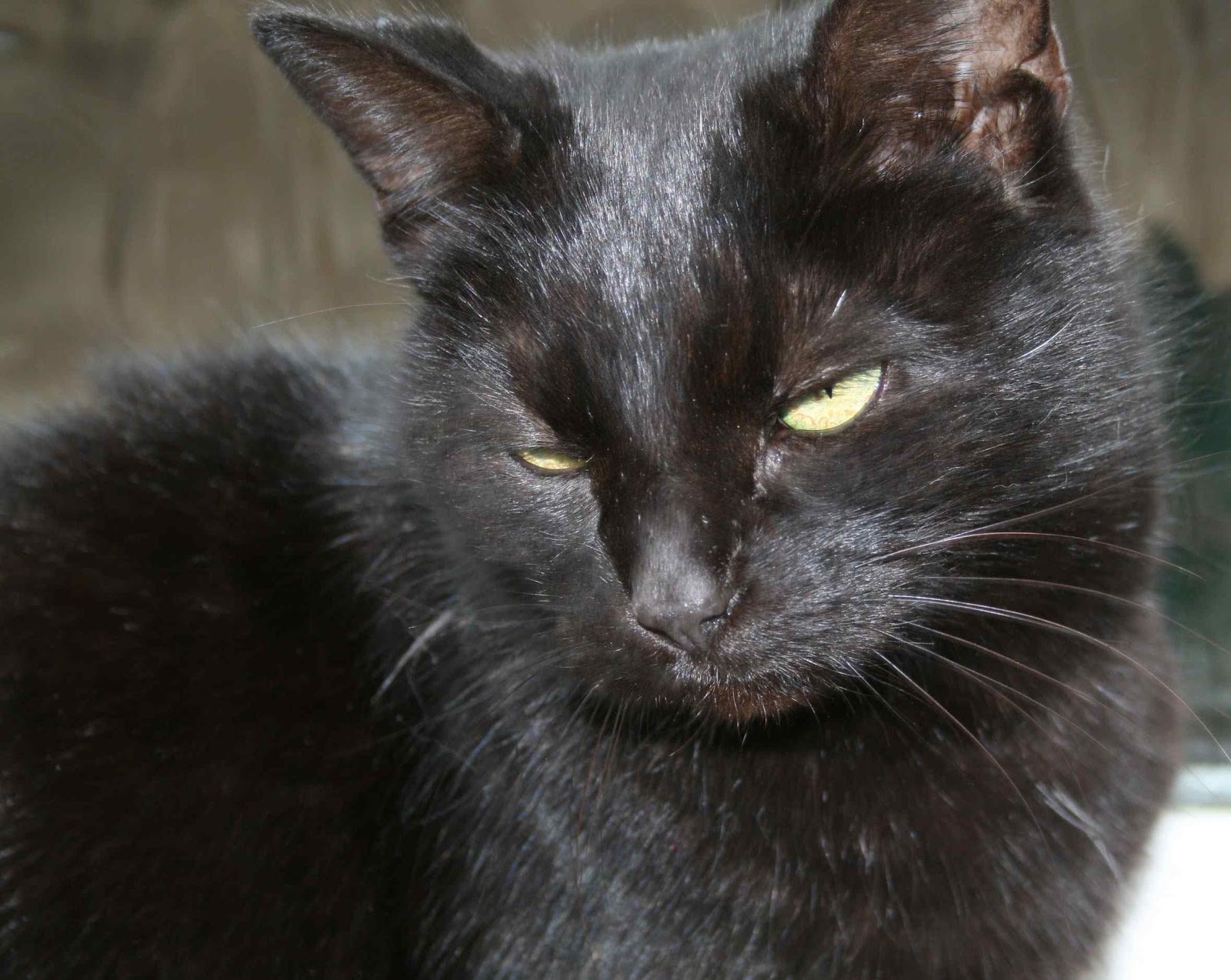