When It Rains It Pours Abundance

I have taken a break from blogspot since we moved into our new life in Chiang Mai, Thailand. We relocated here at the end of June. Lots of beginnings and firsts and adventures in the short time we have been here. It's my plan to post monthly again starting with this entry. (This blog is based upon a story that was published in the Bangkok Post.)

It's September. The rainiest month in Thailand. Which means it's flood season. Many parts of Thailand are now under water.

Mercifully there are no floods in Chiang Mai. Nor has there been a repeat of the deluge that submerged Bangkok last year. Other places have not been so lucky. A second wall of water hit Sukkothai two days ago just as residents had begun to clean up and to return to their daily lives. The floodwater there was 50 cm high on average.

But for the people in Mae Rahn village, flooding is not all bad news. The seasonal downpour generates opportunities to make more income and to take a break from growing rice.

Most farmers, says local resident Samsak Ponghom, are fully aware that their rice paddies will be inundated by floodwater in September. As a result, they quit farming and catch fish, paddy rats, and snakes for income supplementation and personal consumption. "Pad pet moo na, (spicy stir-fried rat meat), is a popular menu item during the flood season, while the meat of snakes, particularly cobras, yields better prices," Mr. Samsak said. (Note to readers: I do not know how to cook spicy rat as it was not taught at the lessons I took recently at the Chiang Mai Thai School of Cookery.)

Another resident, Payong Khamsai, who raises ducks for a living--4500 to be precise--welcomes the flood because it helps her save money on the cost of transporting her birds to their natural forage grounds. When there aren't floods, she has to hire trucks to take the birds to their favorite places to eat. During the floods, the water acts like a food delivery service so the ducks can eat at home, so to speak.

Payong, like many other residents, thinks the floods aren't that bad

Some, like Mr. Somsak, wish the floods would last longer. Typically, the water subsides after 3 months. "It should be 5 months at least", he says. 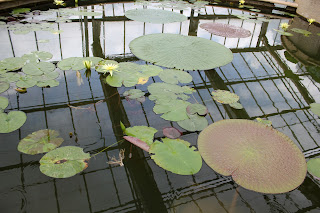 When life gives you lemons, make lemonade.
Posted by Unknown at 7:39 PM