When I first arrived in Hong Kong, one of the things I noticed was that Chinese people didn't laugh at a lot of the things I thought were funny. In fact, although they smiled more often than me and most Westerners I know, they didn't seem to laugh much at all.

I began to explore one of my previously unacknowledged and therefore unexamined stereotypes about the Chinese, namely, that they are super serious and humor deprived.

A few months after my arrival, the local paper ran an article that compared the values of Americans with those of the Chinese. It noted that sense of humor is highly prized by Americans. To us it denotes intelligence and creativity. Although the Chinese appreciate a good sense of humor, it was not as highly prized and did not carry the same significance. Hmm, I thought. Being around people who are humor deprived-- by American standards-- didn't sound like a lot of fun. But then I wondered if this was really true? I mean, how could a group comprised of a billion plus people, many of whom live in very close proximity to one another, survive and even thrive without a good sense of humor?

Hong Kong is one of the most densely populated places on the planet. Yet it doesn't have anything that approaches the current theft and murder rates of cities in the U.S. Educated in the mythology of the West, I had always been told that dense population and crime went hand and hand. Yet clearly here, they do not. (And no, Hong Kong does not have the death penalty or people who disappear into police custody never to be seen or heard of again.)

It's true that the Chinese have a rough history full of war and chaos that stretches back centuries. Not too much to laugh about. Only recently have order and prosperity emerged and they are too new yet for the average Chinese to trust that they are permanent. Nonetheless, China is in bloom. The country has issues--many of them--but it is full of a vibrancy and optimism that jaded Westerners like me cannot appreciate until we actually come here.

Besides vibrancy and optimism, I have started to notice that the Chinese do laugh. A lot. Perhaps it's a matter of taking cultural blinders off and/or relaxing into a new way of being. Maybe people around me are relaxing, too. Or all of the above. 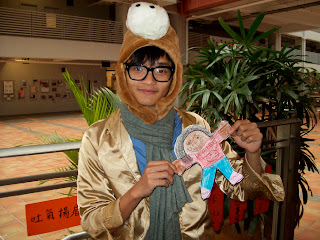 My friend Nat is teaching public speaking at an English language school for non-native speakers in Hong Kong. The school (not my friend) put out a flyer before his last workshop. It read, "At tonight's Public Speaking Seminar, you'll find your inner confidence and see that public speaking is no sweat. You'll realize that at networking functions, striking up a conversation is a dance that goes something like this:

Not fools indeed.
And not humor deprived, either.
Posted by Unknown at 12:04 AM