It's Tough to Be a Security Guard in Hong Kong

The minimum wage law, which is 28 Hong Kong dollars per hour ($4 USD per hour), has been in force for almost a year. Prior to one year ago, there was no minimum wage in Hong Kong.

The average monthly income for half of Hong Kong people is $100 USD per month. Hong Kong is not a cheap place to live. Rent in Hong Kong is among the most expensive in the world--a tiny apartment that is 400 square feet can cost $1250 USD per month (not counting utilities). John makes $593 USD/month. You do the math.

Not being able to afford rent, the security guard has chosen to live in a stairway in the building where he works. He somehow manages to survive on $4.30 USD per day. The rest of his money he sends to a relative in mainland China who has cancer.

There was a lot of heated discussion about instituting a minimum wage law in Hong Kong last year. And although it finally passed, the law has not helped the 10,000 workers, according to the Society of Community Organisation, who fear they will be fired if they complain that they are not earning the minimum.

Also not helped are whole classes of workers like the thousands of women imported from the Philippines for domestic labor who were excluded from coverage.

Nor has it helped the thousands of workers whose employers, upon passage of the law, decided to make their employees monthly contract workers. This move thereby offered employees a monthly flat rate while eliminating them from hourly minimum wage stipulations. Employers then raised the hours that employees must work per day and week. The result has been a net reduction in employees' pay.

John, who refuses to give his real name because he is afraid of losing his job, works 12 hours per day, seven days a week. "I am too old. No one will employ me," he said wearing a face mask to avoid recognition.

Hong Kong has one of the largest gaps between poor and rich in the world and it is growing, much as it is growing throughout the US, mainland China, and the rest of the world. As developers build more and more luxury apartments for rich Chinese mainlanders who are eager to grab property in Hong Kong, estimates are that more than half of the Hong Kong population await affordable public housing by waiting on lists that extend out for years since affordable housing construction has not kept abreast of the need.

It has been quite an experience to live in a city, full of first world opulence and opportunity. Hong Kong has neighborhoods abundant with beautiful, spacious apartments, glittering malls packed with Gucci and Prada, and expensive private schools. 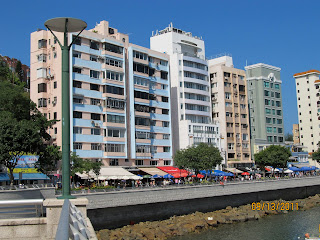 These neighborhoods are elbow to elbow with crumbling overcrowded slums for people who cannot afford typical Hong Kong rents, not to mention designer shops and overpriced schools. 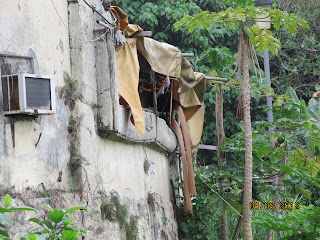 Although this state of affairs is all too familiar to me having lived in America, the things missing are the anger and crime that accompany this gap between rich and poor, typical in the US. Anger and crime are just not culturally accepted here in the way they are in the US. I have yet to figure out why, but it has been a relief to escape them.

But poverty is ugly everywhere. And in a place like Hong Kong where the local people are, by and large, gentle, kind, welcoming, and tolerant, somehow, the poverty seems even uglier.