My friend Annie is a native lifelong Hong Kong resident. I first met her on an excursion hosted by my school for staff and their families.

We met on the security guard bus. I am not a seurity guard so why was I on the bus? Let's just say it had to do with jet lag and being profoundly directionally impaired. Annie had brought along a friend but seeing that I was alone immediately took me under her wing. She introduced me to her friend as well as to all of the other security guards onboard. Although Annie was the only one who spoke English, her introductions and encouragement helped everyone relax. We became one big affable group.

I lost track of Annie after we arrived at the Tsim Sha Tsui boat dock. This was a work day for her and she was required to herd several hundred staff and their families around the various islands we visited and through the restaurants where we banqueted that day. But afterward, we became friends. She generously introduced me, and later my husband after he arrived here, to the tastes of authentic Hong Kong. 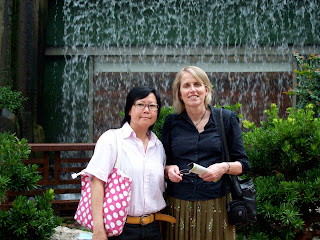 There are many types of cuisine in Hong Kong but dim sum is my favorite Cantonese food. In Chinese, the characters for dim sum literally translate "to touch the heart". They are small plates or bowls of dumplings, buns, meats, and vegetables. The easiest way is to think of them as Chinese tapas. Dim sum are eaten and then washed down with gallons of tea. Annie says it is considered brunch food for retired people by the younger Hong Kong set. However, when we have dined on weekends, dim sum appears to be very much a family affair. Dim sum for breakfast (with lots of tea, of course) is called yum cha.

Typically the dim sum restaurants where we have dined have looked like huge banquet halls. Imagine seas of circular white robed tables that seat 8-10 people with bright lights and lots of people and noise. What the restaurants lack in ambience however, they make up for with great food. Cha siu bau, (steamed sweet barbeque pork buns), shiu mai, (steamed minced pork dumplings), and har gau, (translucent shrimp dumplings) are my favorites. Phoenix (aka chicken) feet are a lot of work to eat but are surprisingly good. If we tire of dim sum and order chicken or fish, the dish comes to the table completely assembled with head attached. Pretty much everything is eaten, (ok, not the bones). When I asked one Chinese colleague who dined with me at a Family Day banquet why the feet and head come to the table with the chicken she said it was so you knew you had gotten what you ordered and not some sorry substitute.

My Chinese principal gave a more philosophical answer. She said it is related to the Chinese love for whole things as opposed to mere parts. This love is borne out by how the Chinese think about many things in addition to food, including health and medicine. No part is treated without consideration of the body as a whole.

Exploring this world view through food has been fun. There is a lot to be said about considering wholes as opposed to just parts. So in that regard, dim sum is a misnomer. It, like Hong Kong, has touched not only my heart but my whole self. 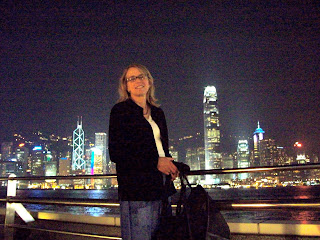