Yesterday, just as on most Sundays for the past few months, my husband Nat, and friends Dennis and Monica, have been walking dogs for PALS. PALS stands for Protection of Animals South Lantau. (They wisely chose this name over South Lantau Animal Protection, or SLAP, after some discussion.) PALS describes itself as a small but dedicated group committed to do their best to rescue and rehome abandoned and unwanted animals on Lantau Island. PALS not only rescues dogs but also cats, water buffalo, and snakes.

Speaking of the latter, one recent Sunday evening in February, boxes upon boxes of live snakes were discovered by a lady walking her dog on Pui O beach near the PALS shelter. She called PALS who called the police. PALS then began the task of hauling seventy boxes containing large snakes near the waters’ edge onto drier land. Altogether, 188 boxes containing 789 tightly packed Chinese venomous cobras destined for the mainland China restaurant trade were salvaged.

All in a day’s work.

Although we like snakes, cats, and water buffalo, we travel by public bus up and around and down the roads of Lantau to walk dogs. Once we arrive at the sleepy fishing village of Pui O, we wobble off and turn around in the direction we just came from to trudge up a mighty hill. (Mighty hills are plentiful on Lantau as well as throughout Hong Kong.) The sidewalk narrowly edges the road. We can almost touch the buses, cars, and bikes whizzing past. Finally, we arrive at a mailbox underneath the big striped umbrella that shelters it from the elements. (PALS must get some pretty important mail.) We turn right and go up a flight of stairs bordered by jungly trees, flowers, and vines and head toward the metal gate surrounding the well maintained three story building that houses the PALS shelter. 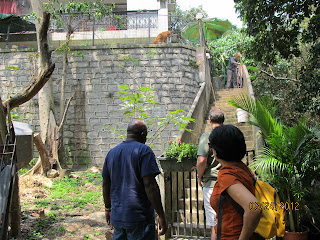 It looks like a residence because it is. Expat Okka Scherer and her veterinarian partner, Dr. Joe Laraya, live here along with 100+ rescued dogs, an odd assortment of cats, and two water buffalo. (The buffalo live outside.) On a previous visit, I invited myself inside. There were no cages, so the dogs roamed free about the house. It all was remarkably clean, orderly, and peaceful.

We called out to announce our arrival. At first, it was quiet. The rescued water buffalo tethered under a tree in the yard just to our right lifted its head lazily to stare at us and chomp grass. We watched a milk white cat on the second floor play with some netting stretched across the entire width, length, and height of the balcony. This netting seems to prevent cats from acting out their ideas about flying from balconies.

Then the symphony of barking began.

Anka came out. (Often she is accompanied by, Andy, one of the paid helpers but this Sunday was his day off.) Anka and the helpers walk the dogs three times a day, and feed, bathe, and love them. The dogs seem pretty happy.

Quickly, Anka grouped and leashed the dogs. She opened the gate and handed them off to us. Nat and Dennis usually walk four dogs a piece. Monica walks two and I walk three. We make two or three trips with different groups of dogs down the hill path leading directly from the house across the treacherous road to Pui O beach and then back. 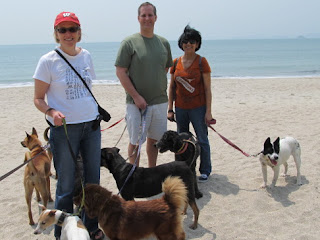 The dogs are, to put it mildly, characters. Although PALS has names for all of them, we have names of our own for some of them. There’s the Leaner-a lopey doe eyed Afghan who loves to slant into you when you walk together. Greasey is a greyhound mix that enjoys slipping her collar upon arrival at the beach. “Hey, you know you love to chase me!” she signals while wagging her rump.

Then there are all the black nondescript but eminently walkable ones we ironically call Chinese dogs because we have been told the Chinese don’t like black dogs. They think they attract ghosts. Too bad. They are great animals.

At first, when we walked the dogs, we were being pulled up and down the designated route. But now that we have watched many episodes of The Dog Whisperer and the dogs have gotten to know us, they settle in nicely and off we go in our respective packs.

Making friends with lots of dogs is grounding and relaxing. The dogs are always happy to see us. They don’t care how we are dressed or what language we speak. Witty chatting is lost on them. They are just thrilled that you are there with them and that together you will explore the beach. I can’t think of a better way to spend a Sunday afternoon.